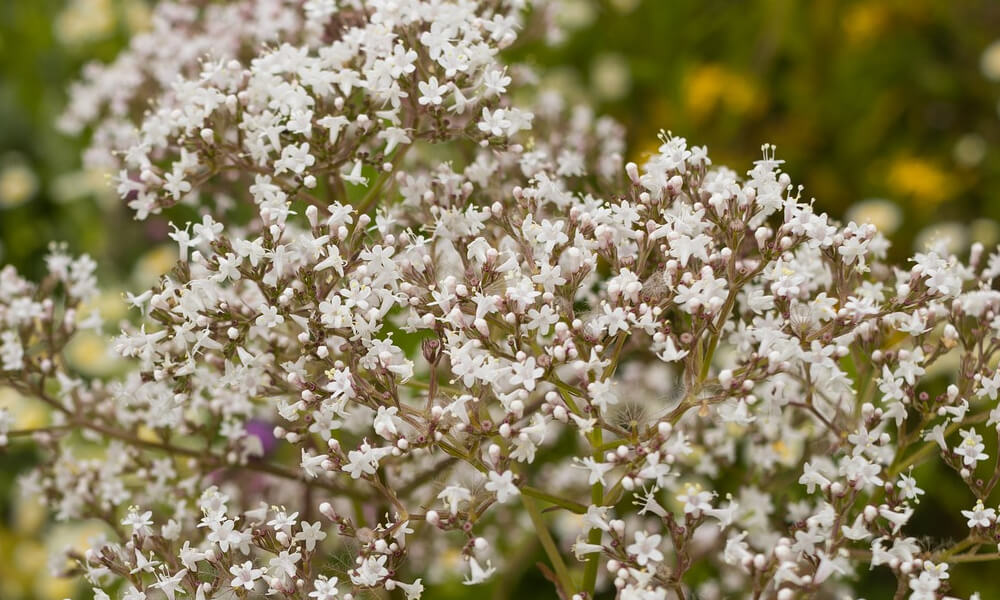 Valerian – the perennial plant with pink and white flowers – is a popular treatment for reducing anxiety. And many placebo-controlled trials have confirmed these anxiolytic effects. Valerian is so effective, in fact, that its impact has been compared to that of prescription drug diazepam, commonly known as Valium. In this article we take a look at the research surrounding valerian to understand how it works and how effective it really is for controlling anxiety.

Valerian – Valeriana officinalis – is a flowering plant native to Europe and Asia. Its flowers are colored pink and have a sweet smell that attracts butterflies and moths.

Valerian has a long history of medicinal use. The famous ancient Greek physician Hippocrates first described its uses for curing digestive problems and liver complaints.

Some centuries later, Claudius Galen prescribed it as a treatment for insomnia. And by the middle ages its calming and tranquilizing properties were well known.

Today, what these ancient physicians long suspected is being confirmed in medical trials. Valerian has been shown to have numerous effects on both body and mind – one of which is reduced anxiety.

Anxiety is an uneasy feeling of worry or fear.

Sometimes it’s understandable – before an important event or an activity you don’t enjoy – but sometimes this anxious feeling is disproportionate to the situation or persists even without good reason. If this is the case, it may mean the person is suffering from an anxiety disorder.

Anxiety disorders are the most common forms of mental illness in the USA, affecting around 18% of the adult population1.

Generalized anxiety disorder (GAD) is another common form – and one that doesn’t have any specific trigger. People with GAD feel anxious the majority of the time and may struggle to ever relaxed or calm.

The problem is to do with chemistry. The body is reacting in the same way it would if it were in danger – even when no danger is present. There is almost always this common underlying chemistry to anxiety disorders.

Fortunately, it’s possible to control this with prescription medication, therapy, or dietary supplements such as valerian.

Valerian has been widely studied as a natural treatment for a range of anxiety disorders including OCD and GAD – with highly promising results.

For example, a double-blind, placebo-controlled study was conducted in 2011 to test the effects of valerian on OCD.

Patients were randomly assigned either 765 mg valerian daily or placebo. After 8 weeks of treatment, the researchers reported that:

“Many herbs with psychotropic effects exist which can have fewer side effects compared to more conventional medications. […] Our objective in this study was to compare the efficacy of the extract of Valeriana Officinalis L. with placebo in the treatment of OCD. […] The results showed significant difference between the extract and placebo in the end of treatment (P=0.000).“

And this isn’t an isolated case, either.

Valerian has also been studied for its effects on generalized anxiety in multiple trials1,2,3,4 – with similarly positive results.

One study even compares the effects of valerian to those of prescription anti-anxiety drug diazepam – commonly known as Valium:

This is perhaps no coincidence as both valerian and Valium have the same mechanism of action.

How does it work?

Valerian works by increasing activity of gamma-Aminobutyric acid (GABA) in the brain.

GABA is the primary inhibitory neurotransmitter in mammals. Its role is to bind to receptors and reduce excitability throughout the nervous system.

Essentially, GABA tells the nervous system that everything is fine and that there’s no need to worry. But individuals with anxiety disorders almost always have reduced activity of this inhibitory neurotransmitter1,2,3.

Numerous studies have demonstrated the ability of valerian to increase GABA activity – either by preventing reuptake or by stimulating its production1,2,3. These effects have been attributed to the high content of valerenic acid in valerian1.

As well as valerian, there are many other natural compounds that have been shown to increase GABA activity. In theory, this should mean they too decrease anxiety levels.

The first of these is GABA itself. Supplemental GABA can be absorbed through the intestine and get into the bloodstream.

However, there is conflicting evidence as to whether GABA can cross the blood-brain barrier when consumed this way. Early reports suggest this is not possible1, while more recent studies suggest supplemental GABA is able to get into the brain in small amounts1,2,3.

St. John’s Wort is another popular natural anxiety remedy. Studies have shown that when it is used in combination with valerian these two compounds have a synergistic effect for reducing anxiety:

Finally, chamomile has been shown to be effective for reducing anxiety in numerous clinical trials. These studies often speculate that these effects may be a result of increased GABA activity.

Valerian has been extensively studied in humans and so is likely to be safe for most people when consumed in normal quantities.

As a common treatment for insomnia and sleep disorders, it’s perhaps unsurprising that the most common adverse effect associated with valerian is drowsiness.

Other reported side effects include:

Despite the low risk of side effects, pregnant and breastfeeding women are advised not to take valerian as a safety precaution.

And, as a compound which slows down the central nervous system, patients due to undergo anesthesia are advised to stop taking valerian 2 weeks before surgery.

As always, if you are unsure, consult with your doctor before taking supplements containing valerian.

“Valerian was a great start for me. My anxiety is now much better! […] I feel fantastic for the first time in a very, very long and tiring time.”

What Hippocrates and Galen suspected centuries ago is now being confirmed by modern medicine: valerian really does promote relaxation and calm.

These effects have been put to the test in numerous clinical trials with highly promising results.

Research suggests the high valerenic acid content of valerian stimulates GABA production and prevents its reuptake. This means there is more GABA available to bind to receptors and reduce excitability throughout the nervous system. This translates to reduced anxiety symptoms and a more relaxed outlook.

The studies discussed here put this hypothesis to the test. Anxiety disorders – including generalized anxiety disorder and obsessive compulsive disorder – were shown to improve with valerian.

So, while it remains to be seen whether it really is as effective as Valium, there is some evidence to suggest valerian really is an effective anxiolytic.