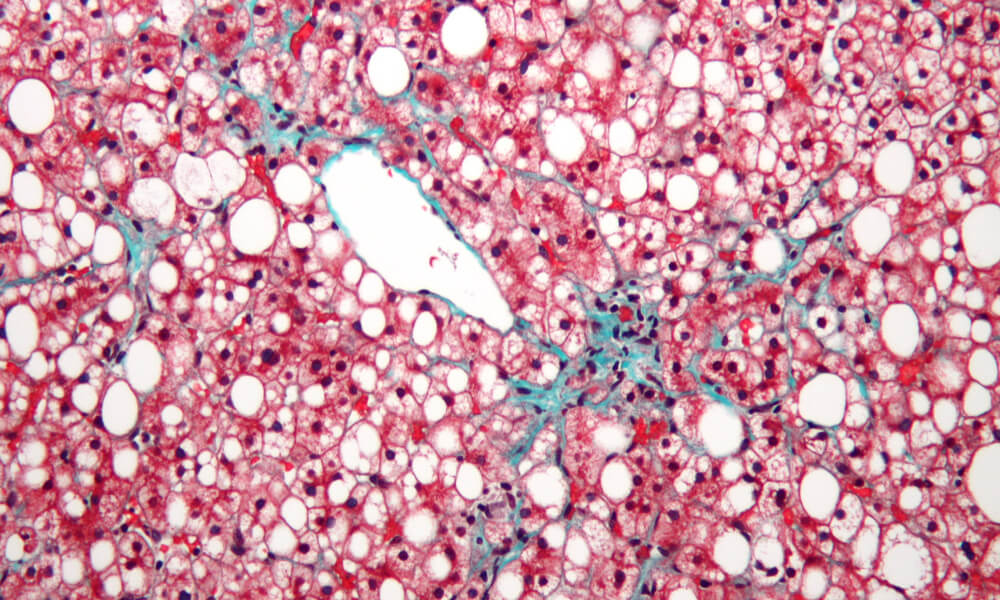 It’s not just what we eat or even how much. New research is shedding light on the importance of when we eat. Studies have shown fasting and time-restricted eating reduce the risk of many diet-related diseases. Non-alcoholic fatty liver disease is one such diet-related disease and affects millions of people worldwide. In the US, it’s estimated that as many as 40% of people suffer from this disorder – many of whom may not even realize. In this article we take a look at whether fasting is an effective way to reverse fatty liver disease.

Fatty liver disease is a buildup of triglycerides (fat) in liver cells.

It’s usually divided into two types: alcoholic and non-alcoholic fatty liver disease. The former is brought on by chronic alcohol consumption whereas the latter is caused by poor dietary habits. Despite differing causes, they both cause micro and macrovesicular fatty changes within the liver.

Fatty liver disease doesn’t always present obvious symptoms. But if left unchecked, the buildup of fat causes chronic inflammation in the liver that can lead to fibrosis (scar tissue) and eventually liver cirrhosis.

And it’s estimated that as many as 40% of people in the US suffer from non-alcoholic fatty liver disease1.

The good news is that it’s reversible. The liver is the only organ capable of regenerating lost tissue and full function can be restored from as little as 25% of the original liver1.

The most effective way to combat fatty liver disease is by addressing the environmental factors that cause it. Abstaining from alcohol and cutting back on unhealthy foods – particularly refined sugar and fast digesting carbohydrates – will stop the accumulation of triglycerides and give the liver a chance to recover.

Abstaining from food has been a feature of many cultures and religions throughout history. It’s long been associated with cleansing, disease prevention and many other health benefits. Now, modern science is backing these claims up.

As an added bonus, fasting has been shown to induce autophagy; the body’s natural recycling process. This is associated with impressive health benefits – many of which are only just being discovered.

There are generally two main types of fast: intermittent and prolonged.

Intermittent fasting consists of restricting eating to a set number of hours per day. For example, you might have an ‘eating window’ of 8 hours in which you consume all your calories and then fast for the other 16. This pattern is maintained indefinitely.

Prolonged fasting means going without food for longer periods of time – days or even weeks. Once the fast is complete, eating habits return to normal.

There is evidence that both types of fast reduce triglycerides in the liver and thus may be an effective way to reverse fatty liver disease.

A substantial and ever-growing body of evidence suggests meal timing is an important factor in preventing obesity and related conditions such as fatty liver disease1,2,3,4.

The benefits of intermittent fasting for fatty liver are supported by studies in rats, such as this one.

Here, mice were randomly divided into two groups. One group was allowed to eat ad libitum – i.e. whenever they wanted to. The other group were only allowed to eat within an eight hour daily window.

Despite both groups consuming the same amount of calories, the researchers observed that:

Mice have all the same organs as humans and are metabolically similar. So this study suggests intermittent fasting may prevent fatty liver disease in humans too.

And research appears to back this up. This study looked at the effects of GADD45β; a gene responsible for controlling the absorption of fatty acids into the liver.

The authors describe how mice without this gene are significantly more likely to develop fatty liver disease. What’s more, they note how low GADD45β in humans corresponded with increased fat accumulation in the liver.

But what’s this got to do with fasting?

The researchers describe how fasting increases the expression of GADD45β. This is further proof that fasting helps prevent fatty liver disease.

“Here, we demonstrate that liver GADD45β expression is dynamically regulated upon fasting stress, […] where it aids in the coordination of liver lipid metabolism, by limiting hepatocellular fatty acid (FA) uptake via cytosolic FABP1 retention.”

The beneficial effects of fasting on fatty liver disease are perhaps unsurprising.

It’s long been known that the body burns its own fat stores for energy when food is restricted. But this study goes a step further and shows how fasting regulates genes specific to fat storage in the liver.

Convention tells us we should eat three square meals a day – every day. With a normal working day, these meals are likely to be consumed within a 12 hour period.

But this conventional approach may not be optimal for everyone – especially individuals suffering from non-alcoholic fatty liver disease.

It’s beyond doubt that both what you eat and how much play a role in the progression of fatty liver disease. But there’s a new piece of the puzzle: when you eat.

As we’ve seen, time restricted eating mitigates many of the negative health effects of overeating – even with equivalent calorie consumption. What this means is individuals with fatty liver disease may be able to reverse this condition without changing anything other than their eating schedule.

We’ve also seen how fasting can increase the expression of genes which prevent triglycerides accumulating in the liver.

Science is only just starting to understand the benefits of fasting. But research so far suggests it may be a highly effective intervention for a whole range of diseases – just one of which is fatty liver disease.

10 Replies to “Fasting to Reverse Fatty Liver Disease: Does it Work?”