Cinnamon is a spice which, for centuries, has been used to treat inflammatory disorders. And inflammation is a big topic in health at the minute. The modern diet have been shown to contribute to a state of chronic inflammation throughout the body. And this is being linked to more and more serious diseases – including heart disease, cancer and diabetes. So, could cinnamon be a tasty way to counteract these negative effects? Does cinnamon reduce inflammation? 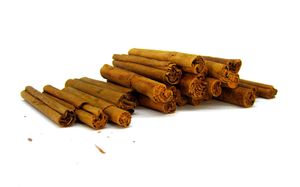 Derived from the bark of cinnamomum trees, cinnamon is most commonly ground into a powder that is used in both sweet and savory dishes.

But as well as being a tasty condiment, cinnamon is a spice which for over 4000 years has been prized for its medicinal effects.

Cinnamon is rich in vital oils as well as the unique compounds cinnamic acid, cinnamaldehyde and cinnamate. These compounds have antimicrobial, anti-diabetic, anti-cancer, heart protective and anti-inflammatory effects1.

There are two main variants of cinnamon: ceylon and cassia.

While both versions boast the health effects described above, the ceylon variety – also referred to as ‘true’ cinnamon – is the better option for regular consumption.

The reason for this is that unlike ceylon, cassia cinnamon contains coumarin. In high doses, coumarin is toxic to the liver and kidneys. This is something to bear in mind if you regularly include cinnamon in your diet.

And regular cinnamon consumption is likely to bring enormous health benefits. Not only does it taste great, it reduces the risk of inflammatory diseases.

When your body is injured or infected, it’s normal for this to cause inflammation. This is part of the body’s response that removes and repairs the damage. Typically, once the threat has gone, the inflammation goes too.

Chronic inflammation occurs when the body cannot remove the thing that’s causing it. And it’s related to a whole host of serious health issues, including:

The modern diet is partly responsible for this. Low quality fast-digesting carbohydrates, processed foods and refined sugar have all been shown to exacerbate inflammation1,2,3,4,5.

Cutting back on these inflammatory foods is an effective way to reduce chronic inflammation and improve overall health. As is increasing micronutrient intake – particularly by consuming more fruit and vegetables1,2,3.

In short, there are many ways to reduce chronic inflammation. So is cinnamon one of them?

Cinnamon as an anti-inflammatory (studies)

Cinnamon has been shown to alleviate a variety of inflammatory disorders from exercise-induced muscle soreness1 to gastric inflammation1 to rheumatoid arthritis1.

Of particular interest is the effect of cinnamon on metabolic syndrome and type 2 diabetes – two closely related conditions.

As this study notes, inflammation and an increase in pro-inflammatory cytokines are common features of metabolic syndrome. It’s speculated that this increased inflammation is what causes cells to become insulin resistant, leading to the development of type 2 diabetes.

The authors discuss numerous pathways through which cinnamon and its extracts may reduce the risk of metabolic syndrome. Observed anti-inflammatory effects of cinnamon include:

The reduction in these inflammatory biomarkers suggests cinnamon extract is an effective supplement for preventing metabolic syndrome. And this benefit of cinnamon is supported by at least one other study1.

The active anti-inflammatory ingredient in cinnamon appears to be cinnamaldehyde, as indicated by this study.

Here, the authors also describe many of the effects mentioned previously such as reduced nitric oxide and tumor necrosis factor-α. They also reiterate the advantages of the ceylon variety over cassia:

Anti-inflammatory activity of cinnamon (C. zeylanicum and C. cassia) extracts – identification of E-cinnamaldehyde and o-methoxy cinnamaldehyde as the most potent bioactive compounds. PMID: 25629927

For centuries, cinnamon has been used as medicine to treat inflammatory disorders. And it seems modern science supports this use.

We’ve seen examples of specific inflammatory disorders improved with cinnamon as well as the specific mechanisms through which inflammation is reduced.

The benefits of this should not be underestimated. The modern diet is known to create a state of chronic inflammation throughout the body and if cinnamon helps reduce this it’s likely to boost overall health and even reduce the risk of serious disease.

“In addition to being an antioxidant, anti-inflammatory, antidiabetic, antimicrobial, anticancer, lipid-lowering, and cardiovascular-disease-lowering compound, cinnamon has also been reported to have activities against neurological disorders”

It also tastes great too! If you’re a regular coffee drinker, consider swapping out the sugar for a sprinkling of cinnamon. Or, add cinnamon to your morning porridge for a healthy dose of flavor.

Not only is it rich in antioxidants and essential oils, it’s clear cinnamon can help reduce chronic inflammation throughout the body.